If you live in the United Kingdom or Australia you probably know lots of Callums. You probably have friends named Callum, and consider it to be as commonplace of a name as George or Steve. Strangely enough, for a name that is so popular overseas, in the United States most folks have nary a Callum in their rolodex. It is not the only name that is more popular in Britain than the United States. Liam and Nigel come to mind. (Note: further research has shown the Liam is as of 2017 the most popular baby name in the U.S.) However, I would guess that most Americans know a Liam or a Nigel, or at least are familiar with these names. 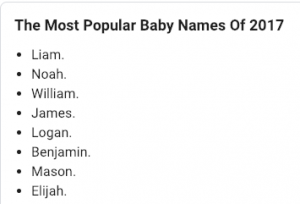 In 2017 Liam made its first appearance on top of the list, edging out Noah.

If you are an American that has spent any time watching the English Football Leagues, then chances are you are familiar with the name Callum. If you are an American who does not watch English Football, more than likely you have not (this was confirmed by a scientific survey of 3 people who were standing in my kitchen). In today’s callum, I mean column, we start with an investigative report to determine if there truly are, an inordinate number of footballers named Callum compared to other names; or, is the merely an illusion propagated by the relative lack of Callums per capita in the United States.

Hear our first chat about The Callum Club on Episode 14. 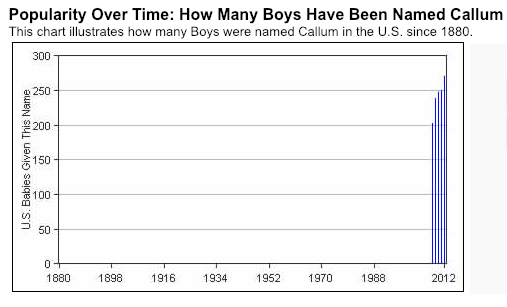 As is seen by this chart the appearance of the baby name Callum in the United States corresponds with the proliferation in popularity of the Premier League.

The name Callum is of Scottish Gaelic origin meaning “Dove King”, and is derived from the Latin name Columba. It is an especially popular name in Scotland, for instance, according to mumsnet.com it was the 27th most popular boys name in Scotland in 2016, tied with Joshua. On the other hand, to say that the name is uncommon in the United States is an understatement to say the least. In a nation that has boasted a population of more than 300 million since 2007, it was reported by babynamehub.com that between the years 1880-2012 that there were just 1209 baby's born in the U.S. with the name Callum. This is an average of less than 10 per year! By comparison, according to data from the same site, there have been 1,149,416 baby's named Joshua born in the U.S.A. during that same period. There were 44,074 Joshua's in 1989 alone.

Perhaps more interestingly, this accompanying line graph shows that this name was not just unpopular, but downright nonexistent in the United States until about 2006. From that year forward, there have been roughly 200-250 babies per year named Callum born in the U.S. cresting in 2012 with 271. Interestingly enough, 2006 is also around the time that the English Premier League began being regularly broadcast in the United States. This preliminary evidence suggests that there is perhaps, indeed, a deeper link between the name Callum, and a proficiency for footballing. Furthermore, Callum on Wikipedia lists a total of 53 footballers under the list of famous people named Callum. This is out of 106 entries in the list meaning that exactly 50% of all of the people named Callum who are notable enough to have a Wikipedia page are footballers. (Note: This includes people who Wikipedia lists as Soccer Players but excludes those listed as Australian Rules Footballers). Meanwhile at list of famous people named Joshua on Ranker.com (vote for our show while you are there) returns basketball players, rugby players, and ever a couple of American Football kickers, but not a single soccer player. Clearly, all of this evidence leads to the conclusion that Callums are in fact more likely to be footballers than people with similarly popular Scottish names!

Callums of the English Football Leagues past and present 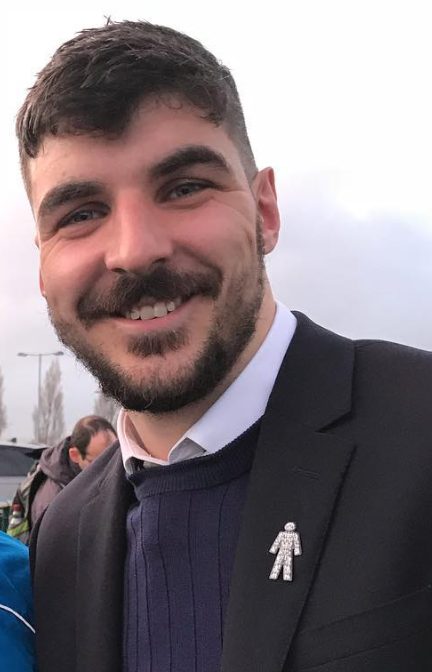 Callum Paterson has been one of the few bright spots for a Cardiff City team that is battling to avoid relegations. - Photo By ToeToThaKnee - Own work, CC BY-SA 4.0

A search of the Premier Leagues official player database yields a total of 18 results for the name Callum, and another 5 results for Calum. This means there are a total of 23 players, or more than one per team. Admittedly, many of these are not star players, or necessarily on the active roster, but many of them are. If you have listened to our show, or watched much of the Premier League this season you are familiar with Bournemouth leading goal scorer Callum Wilson, and Chelsea phenom Callum Hudson Odoi. You may also be familiar with Fulham defender Calum Chambers. Cardiff City defender Callum Paterson is a favorite of mine, and looks a bit like he should be fronting a punk rock band. He has 4 goals in 23 games this season which is an impressive number for a defender. Even Accrington Stanley has a Callum, 22-year-old-defender Callum Johnson who has a pair of assists in 29 appearances so far this year.

While the first Callums that were born in the United States are not even old enough to get a drivers license yet, the name has been a part of football across the pond since at least 1984, when Callum Milne joined the first division Scottish Club, Hibernia. Interestingly enough the now 53-year-old Milne came out of retirement in 2017 to captain PatAlex United FC to Loxam World Cup Glory at The Centre National de Football, Clairefontaine, France. The all-time Premier League leader in goals scored among Callums, is Callum Wilson currently with 29, Calum Chambers, and Callum Patterson are tied for second with 4 a piece. Callum Robinson, is among the leading scorers in the EFL Championship this year with 9 goals. In the Scottish Premiership, Callum McGregor plays for the massive club Celtic FC, and has scored 8 goals for them so far this season. 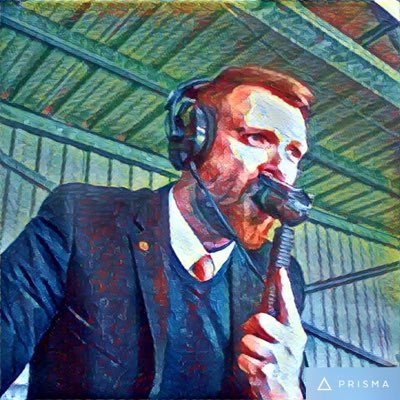 Callum Williams joined the MNUFC broadcast team ahead of the 2017 MLS season. Williams is a seasoned soccer commentator who has covered leagues ranging from Major League Soccer and the English Premier League to the German Bundesliga and other European competitions. (MUNFC.com)

With the explosion of Callums in English and Scottish Football Leagues over the past 35 years, it was inevitable that we would see an invasion here as well. In other words, an event similar The British Invasion of rock and roll bands a half century ago. As the popularity of the MLS has increased and attracted talent from overseas, we have begun to see a migration of Callums to U.S. based teams. The trailblazer for Callums in the MLS is goalkeeper Callum Mallace who first joined the Montreal Impact in 2012 before moving on the the Seattle Sounders in 2017, and LAFC last season. This year, Callum Montgomery was the 4th overall selection in the 2019 MLS Superdraft by FC Dallas. The 21-year-old defensemen is actually from Victoria, British Columbia, in Canada. He played 4 years of college soccer at Charlotte of Conference USA, where he was a First Team All-American in 2018. The invasion is not only being seen on the field, but has moved up the announcers booth as well. Callum Williams has come over from England in 2017 to become the broadcast announcer for Fox Sports North calling Minnesota United FC games. He is now recognized as one of the golden voices of the league.

At Across The Pitch, we welcome Callums, and that is why we have created a new fan club of sorts called The Callum Club. We will be reaching out to footballers, and those involved in the game who are named Callum to come on the show. These interviews will become part of a special series of shows, and each Callum that comes on the show will be added to the special club page that we are creating on our website. This page will have each guests picture, bio, and accompanying interview. Coming up within the next week we will have the honor of chatting with the above mentioned Callum Williams, announcer for Minnesota United FC. He will become the inaugural member of The Callum Club. We are very excited for this new segment and are honored to have him on the show. We are looking forward to bringing you this exiting interview about the upcoming MLS season, and more to come!