Reno 1868 FC will travel to Championship Soccer Stadium to play Orange County SC this Wednesday, July 24, 2019. It is the second and final USL Championship match-up of the regular season between the two clubs who last met in the season's opening match. They are are currently at opposite ends of the spectrum in the Western Conference. Reno comes into the game in top form and hold the 2nd spot in the table. Orange County, who finished 1st in the table in 2018 are struggling mightily in 2019, sitting all the way down in 14th place. In spite of this, they are from out of the playoff race in the congested West, and are just 3 points out of 8th. However, if they are going to make a push then they are running short on time, as there will be just 13 games left in the season for after Wednesday. This is the kind of match where strange things can happen, being played at 1 PM local time. It is sure to be a hot and muggy day with projected temperatures near 90 degrees with upwards of 50% humidity around game time.

Reno, along with Phoenix Rising FC and Fresno FC, are among a group of three teams that has separated themselves from the rest of the conference. Each of these 3 teams are are least 8 points clear of 4th place. Behind them, things get quite a bit more muddled. In fact, 4th place and 15th place are in the conference are just 6 points apart. Austin Bold FC and El Paso Locomotive FC occupy 4th and 5th respectively with 29 points, while Orange County is one of four clubs between 12th and 15th place with 23 points. Looking at the numbers, Reno appears to be the better side both offensively and defensively. In O.C.'s favor of course is the home pitch, and you would think the weather would be in their favor as well. Both teams will be on 3 days rest, each having played Saturday, July 20, 2019, so all things are equal in terms of freshness.

This game and all USL Championship and USL League One matches can be viewed on ESPN Plus or the ESPN family of networks in the United States. The match is at 4:00 PM EST on Wednesday, July 24, 2019.

Referee assignments have not yet been published, but can be found here once announced proreferees.com.

This will be the 8th meeting all time between Reno 186 and Orange County. In the previous 7 meetings, Reno has won 3 times, Orange County has won 2 times, and there has been 2 draws. It was a draw in the most recent of those, 2-2, at Reno, back on March 9, 2019. This will be the first season that the two clubs will meet only twice, after meeting three times each season since Reno joined the league in 2017. 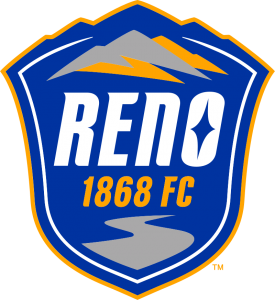 By Copyright owned by the Reno 1868 Football Club organization. Was made into vector image by myself, Matthew Rafferty. - Image sent to me directly from Reno 1868 FC organization., CC BY-SA 4.0, Wikpedia

To say that Orange County isn't quite the same club that finished top of the table and advanced to the Western Conference finals last year would be an understatement. The club won 20 out of 34 matches last year, and so far this season have won just 5 out of 20. They also have 7 losses already, which is just one few than the 8 they had all of last season. Perhaps most telling is that even if they were to run the table and win all 14 of their remaining games, they would still fall 1 point short of the 66 that they tallied last season. A -3 goal difference this season, compared with +30 last season shows that the difference in wins and losses is no anomaly. They come into this match with just 1 win in their past 7 games.

In contrast, Reno seems have vastly improved on what was already a team that finished 5th and made the playoffs last year. Reno's recent run of form seems to have them positioned as legit contenders. If it weren't for the world beating run that Phoenix Rising were currently on, they would be the team that everyone is talking about. They have won 5 matches in-a-row and 6 out of their last 7, with their only loss during that stretch coming against aforementioned Phoenix. In fact, Reno has been so good that in spite of Phoenix's league record tying 10-game-winning-streak, Reno is still nipping at their heels, just 3 points behind. Their +15 goal difference, second best in the conference suggests that this current form is for real.

The recent winning form of Reno 1868 is even more impressive when you consider the departure of Jamaican forward Brian Brown to Albanian side FK Partizani Tirana. He was leading the club in scoring with an impressive 8 goals and 5 assists in just 11 games before leaving to Europe. However, veteran forward Corey Hertzog has stepped into the primary scoring duties nicely, and has recorded 6 of his 9 goals on the season in the past 9 games. Reno has also shown impressive scoring depth, as 10 different players have scored at least 2 goals for them this year. Seth Casiple is the engine that drives this club in the midfield. He has 4 goals and 4 assists this year, and has distributed a team leading 1063 passes.

While Reno has not stumbled in spite of losing a top scorer, there is little doubt that Orange County is sorely missing the departed Thomas Enevoldsen. The Danish attacker had a club leading 20 goals last season for O.C.. Enevoldsen departed in January to join Eastern Conference contenders Indy Eleven, but it appears that he may be missing his old club just as much as they are missing him. So far this season Eneveoldsen has managed just 5 goals in 18 matches for a defensive oriented Indianapolis club. For Orange County, it is clear that they just don't have a player on their roster who is capable of replacing his production. Michael Seaton and Darwin Jones are currently tied for the team scoring lead with a meager 6 goals apiece. Depth appears to be an issue as well, as they have just 6 players on the team with 2 or more goals so far in 2019.

For a team that is currently second in the conference in goals scored with 43 goals on the season, one of the most surprising stats I found about Reno is that they haven't scored on a penalty kick all year. In fact, they have only drawn 1 penalty kick all season, which they missed. They have also only scored once from a direct free kick, meaning that just about all of their goals are coming on the run of the field. They seem to be able to score them from just about anywhere too. Their 33 goals from inside the box alone are 4 more than Orange County's total of 29 for the season. The number that really sticks out though is their league leading 10 goals from outside the box. This ability to score from distance is something that can really additional pressure on opposing defenses.

Anyone who watches football knows that football is a game where strange things happen. Anyone who watches football regularly knows that especially strange things happen in midweek games. However, when you are playing a mid-week game between two regional rivals in brutally hot weather at 1 PM on a Wednesday, you can throw the record books out the window. It's one thing to play in hot and humid weather, it is another thing to do it in the middle of the day with the sun blazing down on you. Weather reports for Irvine have temperatures as high as 86 degrees projected around game time, and humidity as high as 70% throughout the day. What exactly the schedule makers were thinking when they scheduled this one is beyond me. At the end of the day though, this is probably a bit of an advantage for Orange County who are probably used to at least training in this kind of weather. It's hard to imagine it will help much with attendance either for a club that is already averaging less than 3000 fans per game, and only had 1700 this past Saturday for a weekend evening game.

When you look at all of the stats on paper it is really hard to predict anything but a Reno victory here. That being said, Reno is a very good but not invincible team and these are the kinds of games that tend to lend themselves to surprise results. It's also not hard to imagine that if things aren't decided in the first half, that things could good a little sloppy in the second half between two weary clubs. It's also worth noting that Orange County did get a draw at Reno back in the season opener. I really don't think O.C. has the scoring punch to be to beat Reno outright, and if it happens I believe it will be because of a Reno mistake. At the same time, I feel like the environment is ripe for the Reno's 5-game-winning-run to come to an end. If things are tied late, given the weather conditions, I wouldn't be surprised if both managers are satisfied to play defense, take their 1 point, and go home.